In 1893, the centerpiece of Chicago’s World Fair was the White City, fourteen neoclassical masterpieces carefully arranged around a large reflecting pool by architect Daniel Burnham, who knew from the start that the whole thing would be torn down as soon as the fair was over. Certainly Burnham must have been grateful for the opportunity to see his vision work so beautifully in practice, but I’ll bet he hated to see it end, too, and wondered if and when he’d get the chance to actualize it again in a better, more permanent way.

Then again, maybe I’m projecting, since that’s how I’ve been feeling ever since last weekend’s Sunday Assembly in Hollywood, where I finally got to orchestrate a big secular community gathering just the way I wanted…and it worked!

Here’s the story: Two English comedians on their way to a gig started talking about the idea of a church without God, and two years later Sunday Assemblies have sprung up all over the world, mixing what they call ‘the best bits of church’ with pop songs and science to celebrate life in a secular way. Marty and I attended one of those gatherings here in Los Angeles, and afterwards a few Sunday Assembly leaders innocently asked for some feedback. As you can imagine, I proceeded to wear those folks out with my big ideas until they decided the best way to get rid of me was to just let me run a meeting myself.

For starters, Marty and I organized our family and friends – including a bunch of my USC students – to show up early to help set up and, more importantly, greet each and every participant in a warm, friendly way. We had a pianist play upbeat music as people came into the meeting hall, too, and every chair got filled, so the room seemed full. Even before the program started, the positive energy was terrific.

At 11 o’clock Ian Dodd, who helped found Sunday Assembly LA, got up to welcome everyone, introduce me and let people know they might notice a few changes that morning. Then I introduced Maggie Wheeler and the Golden Bridge Community Choir, and the first of those changes became apparent because, instead of pop songs, Maggie quickly got us all singing, “If we want hope to survive in this world today, then every day we have to work on…teach on, march on, and sing on!” in a loud, soulful way. By the time they sat down and Ian returned, it felt like we really were all in this thing together.

The whole program was planned that way. Instead of just announcing the Heal the Bay service project, Ian invited 8-year-old Victoria on stage to read her heartfelt personal invitation, which made everyone want to hug her. Then someone else welcomed all the newcomers to join her for lunch afterwards, before an obviously nervous young man took the microphone to share the touching story of his lonely migration from ultra-orthodox Judaism to secular humanism, and his gratitude for the understanding friendships he’s finally found through Sunday Assembly. By the time we were asked to stand and greet each other, people all had lots to talk about. Then, after the collection was taken, it was my turn to speak. 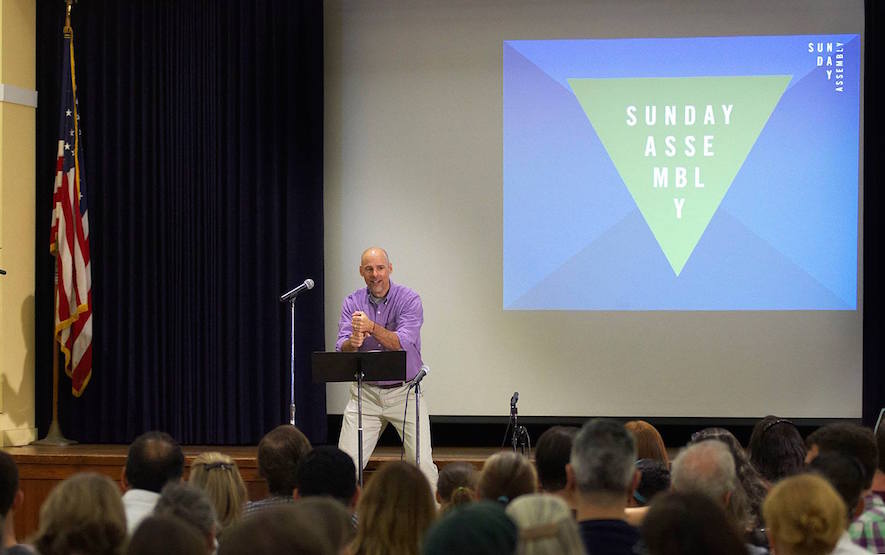 My talk was mainly about learning to live out our values instead of arguing our beliefs, but honestly, for most of the people in that room, what I said mattered a whole lot less than the way I said it. You see, despite having no remaining supernatural inclinations, it turns out I’m still a strait-up evangelist.

It’s not just because I talk with my hands, tell stories and make jokes. It’s not because I know how to work a crowd, either. No, I’m still an evangelist because I still walk on stage fully convinced that what I’m offering will make your life better, and openly aiming to motivate you in that direction. In other words, I speak with passion, like I’ve got good news. Not surprisingly, that’s a big problem for lots of secular people, even when they agree with everything I say.

I can’t blame them for being suspicious, of course. After all, we’ve all heard way too many phony, absurd, shameful, and exploitative messages from people who sound just like me. The fact that I’m encouraging people to make the most of this life in a rational way – by building loving relationships, doing meaningful work and cultivating a genuine sense of wonder and gratitude – is beside the point. For those of us who have been harmed by it, any kind of emotional manipulation can be deeply troubling.

And yet we go to the movies. We ride roller coasters. We smile when our significant others dim the lights and cue up the slow jams. Strange as it sounds, when we know and trust what’s going on, we actually enjoy being artfully frightened, thrilled, turned on, and even saddened sometimes. Likewise, at weddings, funerals and other ceremonies, we purposely set the stage for true emotions that we know will be good for us.

Frankly, that’s what I was going for with the whole program at Sunday Assembly. My goal was to inspire everyone there to want to build the kind of loving, missional, secular community that can heal broken lives and transform all of us – and especially our children – into better, happier people. I didn’t just want them to think it. I wanted them to feel it in their bones.

I said at the beginning that my event orchestration worked, but really, who knows? Everyone seemed to have a great time together, and more Assemblers than ever stuck around afterwards to chat, but I can’t imagine there weren’t plenty of mixed feelings. Honestly, I have no idea what the leaders of Sunday Assembly will make of our little experiment. All I know for sure is that I got a fleeting glimpse of the humanist community I’ve been dreaming about since I left the church, and the experience was so exciting that I hated to see it end.

Here’s a hopeful thought: Ephemeral though it was, the White City inspired a revolutionary approach to urban planning that transformed great metropolises and smaller towns around the world. Mind you, I can’t guarantee that someday there will be vibrant secular communities positively transforming lives in all those cities and towns, but I will say this much: If there are, I already know what they look like.

PS If you’d like to support this kind of community building, just click here to make a donation to the Humanist Chaplaincy of Los Angeles.

Get a weekly email from Bart!